Follow @gaijinass
IMDB or the Internet Movie Data Base is famous as the go to location to find everything about movies. The amount of detail is incredible and it makes anyone with an Internet connection an automatic movie guru. One of the top features of the IMDB site is its ranking system which allows millions of its users to rank the databases movies. This has created a list of the best movies ever … according to IMDB users. The list fluctuates as new movies are released with movies moving up and down the list in huge jumps. However the top 100 is a pretty stable and the list is a great barometer for Internet user’s movie preferences. So after crunching databases and a lot spreadsheet formulas we’ve come up with some very interesting stats behind IMDBs top 100 movies. 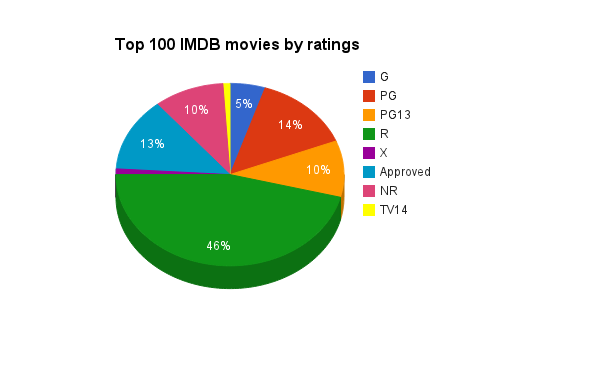 As you can see the vast majority of the movies are rated R. This is surprising considering the Hollywood Blockbuster system that limits the creativity of big releases so that they are PG-13.  There was only one film rated X in the Top 100:  A Clockwork Orange (1971) 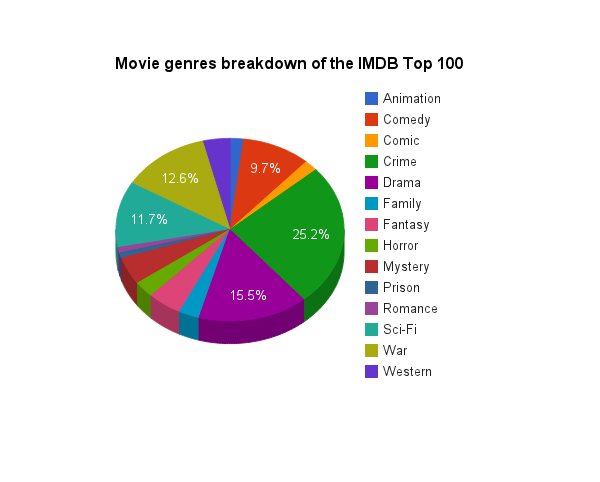 The top five genres were in order: Crime, Drama, War, Sci-Fi and Comedy.

The biggest world wide box office holder of the Top 100 IMDB movies would be The Lord of the Rings: The Return of the King

The majority of films in the Top 100 are American followed by British films. The Italians had a bunch with their spaghetti westerns. The highest ranked foreign film is The Good, The Bad, & The Ugly

which was made by film companies based in Italy, Spain and West Germany but targeted towards American audiences. The highest ranked “purest” foreign film would have to be Japan’s Seven Samurai

and Brazil’s City of God

which rank very close to each other and are constantly shifting as to who is ranked higher.

6 – The movie breakdown by decade

Since the ranking system has only been around for a small amount of time newer movies are favored over older flicks. Yet there are some older movies that even though they haven’t been around for decades they have still soared into the Top 100 just by their merits alone. The earliest movie is in IMDB Top 100 is Metropolis 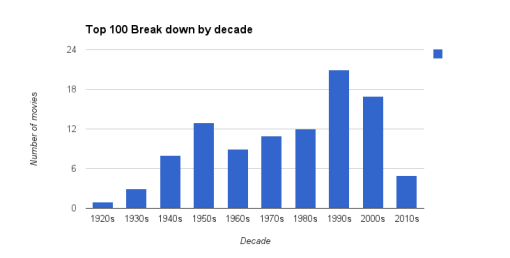 The directors in the Top 100 were not too surprising: Martin Scorsese

both had four each while Alfred Hitchcock

had five each with the winner Stanley Kubrick

Movie length is a relative thing. The theatrical release of Apocalypse Now

was 153 min yet the redux version is 202 min. So for the shortest and longest films I used the time of the theatrical release. The shortest movie in the Top 100 is Chaplin’s Modern Times (1931)

There are a few big franchies that dominate the IMDB Top 100: The Lord of the Rings,

and The Godfather series

. This makes for some interesting mentions. For example Kenny Baker who plays R2D2 is one of the top actors as in addition to the Star Wars films he also had a part in Amadeus

. So I used a point system where I’ve counted the franchise roles as one.

and Lawrence of Arabia so I gave him three points

. Charles Chaplin was in three movies. Danny Aiello is the go to guy for mafia movies. James Earl Jones’s voice work gets him in the top with his work in Star Wars and the Lion King but he was also in Dr. Strangelove so three point for him. So keeping the franchises in mind the most mentioned actors in the IMDB Top 100 are:

2 – Most mentions for writers

Once again because of the franchises certain writers get more points. J.R.R. Tolkien gets a mention but a more impressive author would be Stephen King

whose books made these Top 100 movies:

all had three films where they were the primary writers. George Lucas

has more with his Star Wars trilogy as well as writing Raiders of the Lost Ark.

Billy Wilder ties as the winner with five movie writing credits in the Top 100:

Although the Nolan Brothers have four (Five if you separate the Batmans) movie writing credits in the Top 100 with:

When I first started out on this I though Clint Eastwood would be the top mentioned person as a highly respected actor and director but he only had a few points.  So when giving points for acting, writing and directing then the most points for the Top 100 films of IMDB would be Charlie Chaplin for writing, directing and then staring in these three Top 100 films: