Follow @gaijinass
Taking a sick day in Japan is a tricky thing. It makes sense if you are sick to stay at home and avoid infecting your co-workers but the company doesn’t want to lose productive workdays from you. With the stagnant economy there is a lot of pressure not to take sick days yet it’s your right to take them. If you’re a full time worker how many sick days you get according to Japanese labor law is pretty straight forward.

For English teachers it’s a little tricky. It used to be English Teachers were paid a monthly salary all year so they got paid holidays in the winter and summer but these jobs don’t really exist anymore. Most ALT jobs now only pay for the days you are physically in the school and so don’t pay holidays. This leaves the teacher out of luck and out of work during the summer when there isn’t school. Most Companies who staff the schools try and scam the teachers out of the sick days they deserve. First since most ALT teachers only work part of the year they classify them as part time workers. This cheats them out of the health care and pension benefits they would get under Japanese Law. They also only offer one or two sick days a year.  If the teacher goes over that they are often penalized or fined, sometimes as much as 12,000 yen a day ($120).

Agencies often take the line of reasoning that since they employ foreigners in Japan they are outside of the law. They are not. Japan has clear laws governing how many sick days a part time employee gets. The chart below is a guide to what an employee in Japan either foreign or Japanese gets for sick days. This is what the law says according to the Japanese Legal Code: Employment Statute 39: 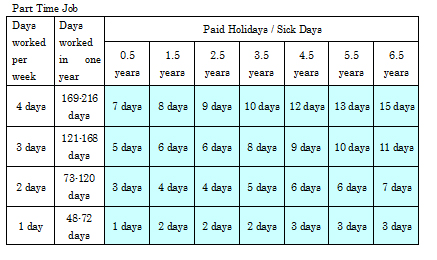 So using the above chart calculate how many days you work in a year. Then calculate how many years you’ve worked at the company to figure out how many sick days / paid holiday you get. So if you work 170 days a year and you’ve worked at the company for 2 years then you should be getting eight sick days a year. Here is the relevant page from the Japanese Labour guide: 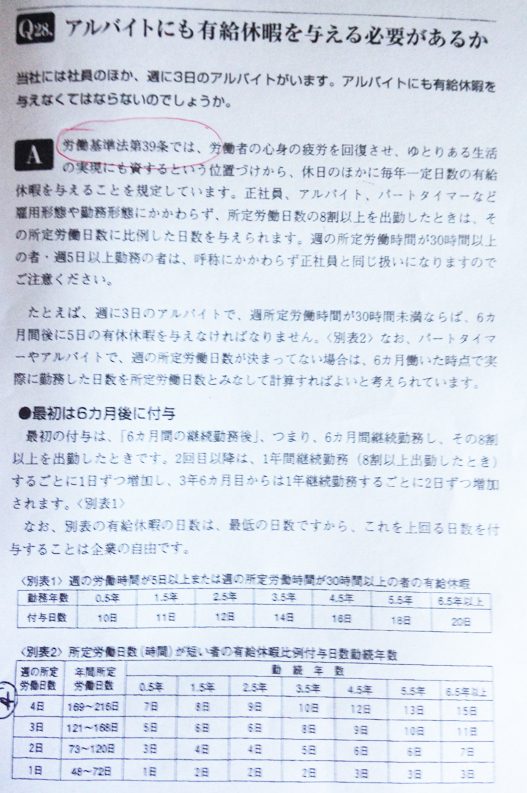 For other “How to … in Japan” guides, try these:

One thought on “Guide to Sick Days in Japan”