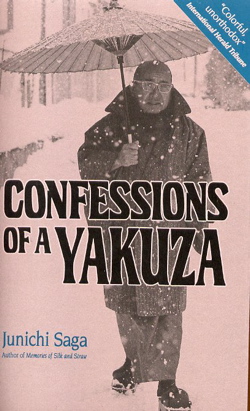 Confessions of a Yakuza (浅草博徒一代) is a the true story of a Yakuza, Eiji Ijichi, as told to the doctor who took care of him just before he died. Maybe it’s the content but reading this story makes me feel that this doctor, Junichi Saga, missed his calling as a writer. The story is gripping and the random accounts of Ijichi’s life are fascinating and an incredible insight into pre-Pearl Harbor Japan.

This guy led an amazing life and came into contact with all sorts of elements of Japanese society that you never hear about. And while his accounts of living as a Yakuza are interesting it’s his observations of normal Japanese life before World War II that are fascinating. Reading the book is like taking a virtual tour of that era. His accounts of police brutality are particularly interesting. Apparently back then a late night stroll past a police box entailed police questioning, and a nice body search. As why would you be up late if you weren’t up to something bad.

He also debunks some Hollywood myths about Japanese gambling dens. For example the common story of patrons gambling everything away. Ijichi talks about how customers who were on a losing streak were bad for the gambling hall’s image. So those that lost a lot of money were politely and firmly told to leave and come back another day.

But what is really interesting is his account of how after Japan surrendered, powerful interests totally looted the Japanese military industrial complex before the Americans were able to gain control. These groups went onto become the most powerful organizations in Japan.

If you like these reviews, you should check out: