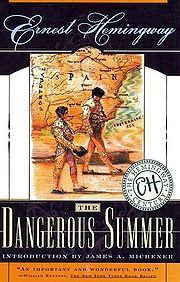 The Dangerous Summer is a book written by Ernest Hemingway, published in 1985, which describes the rivalry between bullfighters Luis Miguel Dominguín and his brother in law Antonio Ordóñez during the “dangerous summer” of 1959. It has been described as Hemingway’s last book.
In this masterful and vivid account Hemingway captures the exhausting pace and pressure of the bullfight season, the connection and pride of the matadors, and the mortal drama as in fight after fight the rival matadors try to outdo each other with ever more daring performances.

All the above is true…but for a Hemingway “Otaku” (maniac) this book offers much more. The incites into Hemingway’s personal life as he is aging and is clearly famous is too much to pass up. His technical know how in regards to Bull fighting is impressive as well and it necessitates an entire chapter at the beginning of the book of terminology and explanations for techniques etc as Hemingway takes no time to slow down and explain during the narrative.

I have read this twice and although it is not A Farewell to Arms or In our time, two personal favorites….it is a very compelling piece of Hemingway must read goldenness.

One thought on “The Dangerous Summer”