The Emperor of Japan, Akihito (83) is an old guy,  who wants to abdicate his throne, but supreme leader Shinzo Abe won’t let him.

There, a perfect microcosm for so many lives in Japan:

In short, slavery is alive and well in modern-day Japan.

Abdication just means giving up a position of power.  For a King or Emperor, it means voluntarily giving up that position and passing it along.  In July of 2016, Akihito, the current emperor of Japan, said he wanted to do just that.  Although declining health has been given as a reason, it’s pretty clear to everyone that his desire to give up the throne is based on his dislike of Abe, and Abe’s militaristic policies.

And, possibly, Mo’ money mo’ problems; it’s so hard at the top.

So, fine, Akihito is an older guy who wants to retire, people retire all the time.  In fact, abdication is not a new concept in Japan.  Back in the day, abdication was the norm.  Now, they haven’t had anyone quit being King since 1817, and since Akihito hinted at wanting to “get off-grid”, hinted because he’s forbidden from making any political statements, the government has had their collectively stolen panties in a bunch since there is no formal rule in place explaining how this is supposed to work.

Yes, there’s no rule in place, no law, so the poor old guy, not only can he not quit his job, but he can’t even say he wants to quit his job.

Emperor?  We call that something different where I’m from.

But ultimately, this defines Japan and the Japanese P-E-R-F-E-C-T-L-Y:

No rule = No action.

Every place else in the world, when there is an absence of rules, one just does what one wants to do; in Japan, they freeze in place. Anywhere else, Akihito could just put on some jean shorts, an Aloha shirt, some Ray Bans and head for coast.

Not in Japan though. In Japan, the Emperor is shackled in word and deed; an indentured servant whose contract is never going to finish.

But Japan is a free country, right?

I’ve said it many times: “If I was Japanese, I’d never live here.” And now that I’ve come to a point where I’m sort of turning Japanese (I really think so), I’m gearing up to leave.  Well, why is that?

Because, NO; Japan is free in theory but not in practice.

What Akihito is experiencing is what many Japanese experience on a daily basis.  The day by day grind of the office is mind numbing and soul crushing.  It’s a seemingly never-ending exercise in futility and play-pretend.  We’ve written about it before: Very little is getting done while everyone pretends everything is getting done.  Then, lots of company workers leave the office…only to go back to their room in the company dorm.

It’s endless meetings, piles upon piles of paperwork and dead-serious coffee breaks.  Respite is only found in the flatulent release of a drunken outburst locked away in some karaoke booth; immediately forgiven due to alcohol, a god given bout with influenza, retirement (which some are unable to even consider) or death. 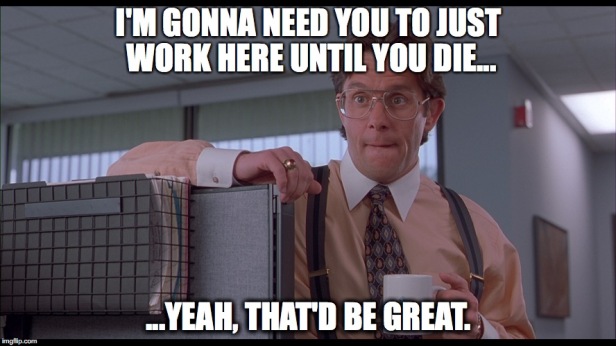 And then they just keep working.

It can’t get any worse, right?

Although, rarely talked about (I am having trouble finding sources), it is not uncommon for Japanese company workers to continue working…even when they aren’t getting paid.

Off the top of my head I can think of nine cases over the years of people I knew working in companies who continued to work despite not being paid for months at a time.  I also can’t remember a single case in which those late funds were refunded.

So, these people go to work, want to quit but are told they can’t, and then sometimes even work without being paid for their labor?

We have a word for that in English…

Now this is the part when the shimmering-gaijin-knight comes riding in on his/her stallion, or worse yet a member of the League of Extraordinary Asian-Americans materializes, to lecture and tell me that I don’t understand Japanese culture, saving face, the value of appearances to the family and blah-blah-blah.

Well, I do understand it, I just don’t value “saving face” over more detrimental outcomes, such as someone killing themselves due to horrific working conditions which forced them into a deep depression.  Or, someone taking loans from dubious businesses just to pay rent and eat, while their company refuses to pay them for months on end, and they eventually have to go underground to escape loan sharks.

Saving face and other superficial concepts take a back seat to people’s freedom.  Be it Akihito chained to the thrown, Yonosuke bond to his desk, Jinyeo shackled to a mattress, Liam locked to a plow, or Kunta Kinte getting his foot chopped off, it’s all different forms of slavery. So, I say fuck Syouganai and saving face; your sand is slipping through the hour-glass; it’s time to take action.