, is about a private detective in a not to distance future.  In Brin’s future, video surveillance is so pervasive that as long as you’re not in the deep wilderness you can be recorded and tracked 24/7.  Camera feeds from store surveillance, drones, red light cams, British style police CCTV cameras capture everything.   To track someone all the detective needed to do was go online and purchase the rights from various camera sources and watch the target go about their day.  That future is almost here.

As time goes on the cost of storing electronic video files plummets as does the cost of video cameras.  Even while their price is falling video cameras are improving their quality and getting smaller and smaller.   It’s almost economically feasible to not only record you 24/7 but to permanently store that footage.  Some Police agencies are already video taping each car that enters and leave their zone of control.  When a street dragster posted a video about an illegal race attempt to drive as fast as possible around Manhattan the NYPD were able to identify his car using store video surveillance from businesses the BMW passed as it zipped by.   With the advent of cheap, high quality camera phones there is even more potential for video surveillance.  Even now at big events there is almost total coverage as shown by the massive amounts of angles of the Boston Marathon bombing.   The social media site Reddit constantly has its Redditors unknowingly taking pictures of events from different angles: 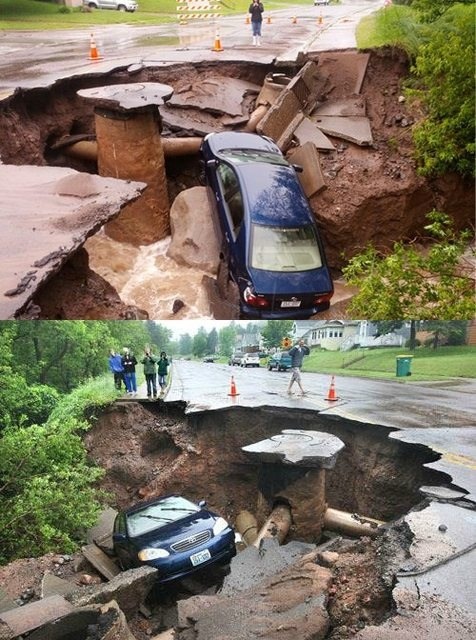 As Google Glass becomes more common there will be even more surveillance and under the current legal atmosphere there is not much you can do about it.   Laws of most countries state that once you leave your house you can’t expect privacy.  When you step into a private businesses they can record anything they want inside their doors.

On the flip side of being constantly watched is that it’s not only you but everyone is getting filmed.

Lazy workers, corrupt officials and even the police.  Initially in America police started arresting people who were filming them, threatening them with years in jail.  However in 2012 the Supreme court guaranteed the rights of citizens to film the police.  Now some police are embracing cameras.  Studies have shown that when police use wearable cameras their departments “saw an 88 percent drop in complaints against police and a 60 percent reduction in uses of force by the police.”

Hollywood is even taking notice. Famously and still probably the biggest financial POV movie success was the 1999 Blair Witch Project

. But I think one of the best immersive POV camera work that shows the possibility of POV cameras are clips from the 1995 Strange Days movie

, of course that footage was jacked from the brain…

Speaking of police surveillance the creator of Training Day

After watching that movie it was clear we are on the verge of being able to film an entire movie from real events sort of like how the Godzillaish Cloverfield did it.

Instead of just the one camera a “filmaker” could use footage of real events from multiple sources and angles.

3 thoughts on “Cameras everywhere, everyone is watching”