I’ve lived in Tokyo for a long time, years.

One of the most controversial places in Tokyo is the Yasukuni Shrine, it’s always in the news and I’ve never been there. For those that don’t know when the press talks about Japanese politicians pissing off Asia by paying their respects at a Tokyo Shrine, Yasukuni is the one they’re talking about.

Built in 1869 to honor those that died fighting for Japan it has served that purpose for decades including honoring all the men, woman and children who died fighting against the Russians in 1905, WWI all the wars in between, and of course WWII. After WWII the total count of Kami, or spirits, the shrine contained was almost two and half million. At that time the other Asian countries didn’t have a problem with it as the American occupation authorities forbid allowing the war criminal spirits, ghosts, or Kami, into the shrine. In 1969 the Japanese decided to let into the Yasukuni the spirits of “War Criminals”. Since then the rest of Asia goes crazy every time a public figure mentions the shrine, as they view politicians visiting the shrine as honoring these war criminals while the politicians themselves say that they are honoring everyone who died for Japan.

Every August 15 (The day Japan surrendered to the Allies in 1945) there is a celebration, period of mourning where people come pay their respects and pro and anti-Yasukuni demonstrations take place. The demonstrations get very heated and always bring out the hard core right wingers who try and fight the anti-Yasukuni protesters. In 2010 the two sides came to blows but since then a massive police presence keeps the two apart. Here are some of the pictures I took when I was there. 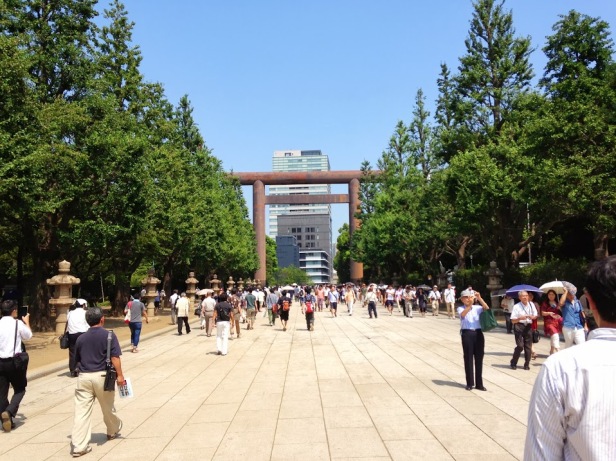 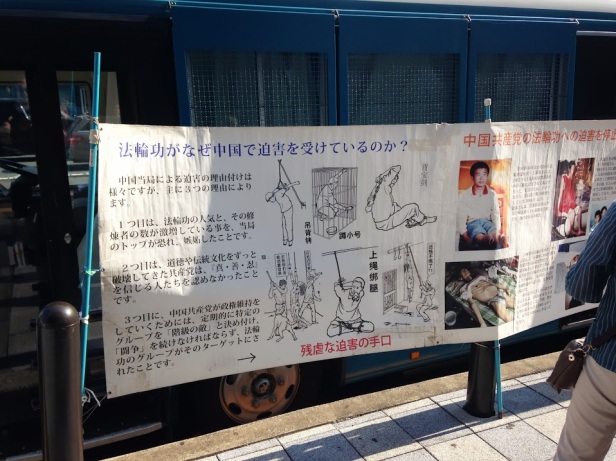 When I was reading about what to expect while visiting the shrine I came across this guy talking about how in 2009 he got caught up in the energy during a full-on Yasukuni riot. At one point a Right Wing nut attacks him, as a visible foreigner, and takes his camera then he remembers what happened next:

With hardly any time to have thought about what had happened, another man grabbed me, though he was quickly restrained by the police, who then, much to my chagrin, released him right in front of me as they ran off to deal with other problems. This man ,too, came up to me and shook my hand, saying- This is amazing isn’t it? Where else but here could you see energy like this? (all over the world?!?!)

I thought about it for a second, looked around, … My assailant and some other people standing nearby who had been listening in, laughed and said…. hey, you are right!

The more I think about it, the more that thought rang true. The surge of primeval energy, the cathartic release of a years worth of tension, the bloody noses, and noise and exhaustion — AlienTimes

During the protest this year one guy, somehow, managed to get over a police barricade, two police cordons and then attack protesters holding a giant effigy of Emperor Hirohito as a Nazi skeleton during the War. The police basically just push him back into the crowd but the cheer he gives reminds of that blog.


If you liked this check out our other Image based articles:

5 thoughts on “Visiting the Yasukuni Shrine”