Sex is  an amazing motivator.

There are many things that motivate me to lose weight. Three things in particular right now; One being the fact that I feel like a fat-ass compared to all the skinny/small Japanese people, ESPECIALLY the women. Two is a major one, kickboxing. I HAVE to lose weight for my competition coming up in September, about 7 kg / 15 pounds. And the third one….

I want to have hot sex.  I told you, its an amazing motivator.

I want to lose weight, feel sexy, and feel comfortable being naked in front of someone. After my last fight (January 2010)I was at 65 kg / 143 pounds and feeling great about my win, SO great that I decided it was time to reward myself by binge eating piles of junk food everyday. Inevitably, I got depressed and homesick soon after and found I couldn’t STOP eating. I have been trying to diet ever since. I was my heaviest at 75 kg / 165 pounds, and have lost some weight in the last month or so, but I still have a way to go.

I think though, that most of you readers are not here to listen to my lamentations in regards to my attractive binge eating habits so I will just get on with it.  About my sex…..

There were many firsts with Shion. First time I had sex in Japan, first Japanese guy I ever had sex with, first ‘Host‘ I had sex with, and first Love Hotel I ever used. To get the story set up, I want to explain what led me to find and sleep with a guy like Shion. I had just moved to Tokyo after quitting my shitty job at an Eikaiwa down in Okazaki. I guess, the job itself wasn’t that shitty, just a bunch of crappy circumstances. The most immediate disappointment was just my initial impressions about Japan. I have wanted to come to Japan ever since I was 12 years old, and was so excited when I actually got a job and plane ticket to actually fly over here. But that all faded fast after being placed in Okazaki, a very small, boring city.  I suppose Okazaki is a nice enough place, but I came here looking for my fantasy, not for real life! Come on Japan, Work with me!

The first job I found in Tokyo was at a ‘foreign ladies’ bar in Tokyo. This is where I met my awesome friend, Hannah, who is a singer from LA. She had also moved to Tokyo recently, so we were both ready to party it up. This is where Shion came into the picture. Hannah and I had started off going to normal bars and clubs, which were fun. But then we discovered ‘Host’ bars. For those of you who don’t know, a Host bar is like a Hostess bar; where young, pretty girls are paid to sit, talk, and drink with men; but it’s the other way around; young, attractive men are paid to talk, flirt, and drink with women. We visited quite a few bars over a couple of weeks, having fun getting all this attention from guys. We ended up finding a favorite bar (in the middle of Kabuki-chou, a very classy area.) which is where Shion had worked. We invited him and some of the other guys out for more drinking after they finished work. We ended up going to a karaoke bar and Shion and I hit it off. He was your typical Host; anime-styled hair, fashionable (yet ridiculous clothes, good looking, skinny. But he had half-sleeve tattoos on both of his arms, and I’ve always had a thing for tattoos. After hanging out a few times, it was set up that Shion and I would end the night in a Love Hotel. (By the way, he didn’t speak English, and my Japanese was still awful at the time, so that’s why it was set up with one of the other guys who spoke English, and of course, Hannah.)
So we were off! We checked into a hotel nearby, went up to the room…which was everything you could expect from a Love Hotel; blacklights mixed with soft lighting, music playing in the background, and a drawer full of condoms. So we started undressing each other, I had a condom with me, so I gave it to him, he put it on and we started. Then, about 2 minutes into it he stopped and said, ‘Too big’ while making a frowny face and motioning at the condom. I said, ‘Ooooh, whoops!’ Then he asked, ‘American?’ I nodded and we both laughed a bit while he threw the condom away. Now, just to be clear, he wasn’t THAT small, he was normal in length but I guess he had just slightly less girth than the average American guy. At any rate, he pulled out a condom from the drawer and we went along our way, and surprisingly he seemed completely unphased by what had just happened.

Then there was the time we got it on in my guesthouse. This would have been the second time we had sex. Neither one of us had money for a hotel, so I suggested my guesthouse in Ginza, as he told me through translation of his friend, that he shared a room. So we were off to my guesthouse, THIS time with Japanese condoms in hand. My room was really small, about 10 ft by 8 ft, and I had a futon on the floor with some clothes and stuff next to it. We started getting it on, as people do, and about halfway through, there was a strange noise coming from nearby. We both noticed it, looked around briefly, and then kept going. We finished, but the noise had not stopped. I sifted through the items by my futon, the pile of junk, and oh yes, of course, somehow my vibrator had switched on. I pulled it out to turned it off, and out of nowhere, this cartoon character of a man, someone that hadn’t spoken 3 words to me in English, the guy that couldn’t order fries with his Big Mac if his life depended on it, Shion yelled, ‘Laura!…. Masturbation!!’

In America, I usually had a boyfriend or a special friend, and often with good, sometimes great chemistry. In Japan….one year and 5 months later, I am still waiting. I believe there are a few reasons for this.
First being the language barrier. It’s true, I have been in Japan over a year, but the first year I was here was hell for me and I didn’t really care about learning Japanese as much as I cared about having someplace to live, some food to eat, and NOT getting groped or forced to give BJs (As explained in my last post.)So my Japanese level is not where I want it to be. But I am starting to change that this year.
Also, I think my self-image, at least lately, has affected my sex life. Obviously, if I don’t feel sexy or attractive, guys are not going to find me those things either. And I can honestly say I haven’t felt very attractive for the last 4 months or so. But that will change soon too, as I plan on getting my ass in top shape this summer.
As for guys in Japan….well, this may be a bit unfair, but I have narrowed it down into 6 categories…
1) Young, Japanese guys who aren’t interested at all in foreign girls.
2) Young, Japanese guys who are interested, but usually just for a one-night stand.
3) Old, Japanese guys who are ewww. 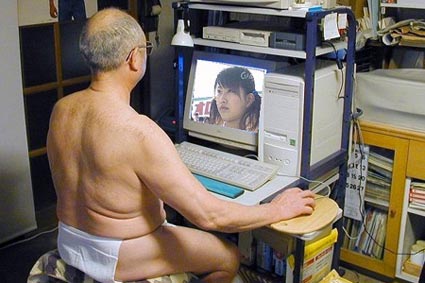 6) Married or taken guys.
I guess there is a seventh category…Japanese and foreign guys who are interested in foreign girls and are looking for more than one night stands, but this group is pretty illusive.

I guess I’ll just have to be patient. Hopefully I can have hot sex before the one year mark, but considering that’s about 2 weeks away….it might be cutting it close.

Footnote: Hot sex pre-one year mark NOT ATTAINED. How do you spell F-A-I-L-?