In this report I decided to take a look at two of the most prolific writers, and hell bent on on demonstrating to you what a fairy you are, men of modern times….Ernest Hemingway

Two men that people have loved and hated.

Before I juxtapose these two larger than life individuals (in the broadest sense of the word) and attempt to get a glimpse of perhaps some motivation or force that the two might have shared, background information on the both of them might be in order. 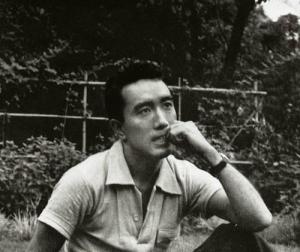 Yukio Mishima
Yukio Mishima was the pen name for Kimitake Hiraoka. He was born in 1925 in Japan and died in 1970 by ritual suicide in Tokyo, Japan.
He was a prolific author, playwright and poet who created a large and impressive body of work including roles in 5 films.
In his Childhood Mishima spent what some have considered to be an unhealthy amount of time with a terribly overbearing grandmother until the age of 12. He was restricted from going outside to play with other boys and subsequently spent his free time with female cousins and their dolls etc.  Scientists and theological experts have conjectured that this likely played quite a role in his being brutally, wildly bi-sexual.
Upon returning to his immediate family at the age of 12 he was then subjected to the rather harsh treatment, read: Spartan-Esq, of his father whom had a “taste for military discipline”. He was heavily dissuaded from writing or reading anything that seemed effeminate.

Mishima received a draft notice for the Imperial Japanese army during WW2 yet, depending on who you ask, was either denied service or lied about medical conditions in order to avoid war time service. Either way he never saw combat.  He went on the graduate from Tokyo University.

His private life is as colorful and eclectic as his collected body of works. He traveled extensively. He was obsessed with body building, Karate and Kendo.  He joined the Japanese self defense force and underwent basic training.  He was also rumored to be gay and to have had homosexual relationships with several men, including another well known Japanese author by the name of Jiro Fukushima.  Look at his photo compilations and one might draw the same conclusion without having this knowledge present.

3 years before his death Mishima formed an ultra “right wing” group composed primarily of young students called the “Tatenokai” or shield society.  3 of these members would assist him later during his suicide, “Seppuku” or disembowelment by sword with subsequent decapitation via an attendant or “kaishakunin”. 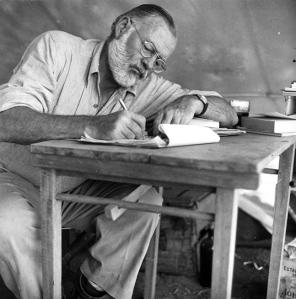 Ernest Miller Hemingway was born in 1899 in Oak Park Illinois and died by suicide in Ketchum, Idaho in 1961.
He received the Pulitzer prize in 1953 and the Nobel Prize for Literature in 1954. He is in fact, one of my favorite writers and his life is fascinating.
In addition to his success in literature he has a list of other awards and commendations.
He has a Silver Medal for Military Valor, a bronze star and two medals for bullfighting. He was a legitimate war warrior.
Ernest Hemingway’s life is well documented so it would be redundant for me to recap all that here.
Best to move on. 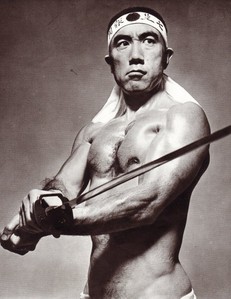 In terms of notoriety, there is no contest. Hemingway blows Mishima way out of the water. This is not simply because of some sort of bias internationally about what constitutes literary greatness either. Hemingway is well known in Japan as well.
It seems to me that both of these men had a preoccupation with Masculine courage but in different forms and their respective voices couldn’t have been more different. Hemingway’s tight, minimal format revolutionized writing and left people fulfilled without answers though. Mishima seems to address the psychology of a situation and details abound but fulling is not a word I would apply to anything of his I have read. Engaging yes. Fulfilling…is this photo of him fulfilling?  Because if it is, you likely own a Cure album.

In addition I am sure the following idea will not make some Mishima fans too happy, I think it’s fair to say that although Hemingway’s life in and of itself intrigues and captivates, his literature can easily stand alone and the respect its been given is appropriate.  Mishima was a powerful writer indeed, however it seems again, that a considerable amount of the homage paid him comes more from his spectacular and extravagant death than from his prowess with the pen.

But you know what they say about opinions….. 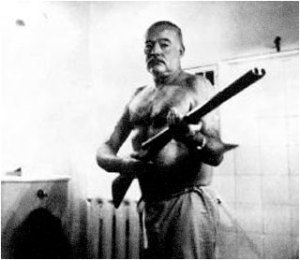 If you like this review, you should check out: