I got tattoos before.  I mean I got them before they were terribly cool. So, I mean I got them before every sad sack of flesh in North America had one.  Today, at least for the moment, tattoos are pretty ubiquitous, and frankly, cringe worthy; mine included. Well, the original ones I got are/were.  Okinawa is where I first received inking.  Quinn and I were out on the town in Okinawa city near the big airbase there, we were stationed at Camp Schwab, which back then was nearly deserted, and after several pints at an empty Irish pub, we decided to get some tattoos. I can’t remember what Quinn got, but I have “The gangs all here” tattooed on my shoulder.

The next one occurred in Newport beach, California. I ended down there “on liberty” whilst stationed at 29 Palms California.  Hilton and I were there, right on the strip by the beach, some hot brunette had just walked up to Hilton, smiling, and had asked “Can you kiss me? It’s my birthday.” “Sure. Come here.” And in his tongue went.  They kissed hard for about ten seconds then the girl and her friends continued on their way.  Hilton and I ended up in a tattoo parlor where he got the Chinese flag tattooed on his neck, and I got the Misfits skull on my inner forearm.  Hilton paid, all he had was 30 extra bucks so, the outline is what I got.

The last one, well, I got that hammered on a beach in Thailand.  It was the old school way with a stick and needle, handheld. Anyway, I think I’ve talked about this before so skipping over the rest.  But, there’s a pic of it floating around out there someplace.

Japan has a long history of Tattooing, which you can read about here. Personally, I’ve always been surrounded by Japanese guys with ink.  One see’s it often in the kickboxing world, not so much on the fighters, but you see that as well, but particularly in the back room, the guys promoting and funding and of course, controlling the gambling.  In addition to that, I’ve chosen to live in places where, for example in Ikebukuro, DJ Operator and I once were rolling around at midnight and after passing a possibly dead hooker being carted off by the cops, we turned a corner and a shirtless gangster was on his knees, outside an izakaya, vomiting profusely; a large, colorful dragon ran across his back surrounded by black clouds and lightning.

It’s just been around, tattoos and that part of the culture. I never considered getting one frankly, because for years I didn’t think I “rated” it. Well, to hell with that, I’ve been here 12 years, divorced once, seen people come and go; friends die.  Then, when so many bolted for the exit during the big 2011 earthquake and the radiation scare, I felt I’d rather stay and face it with the people who had allowed me to stay here, even after I’d been such a pain in the ass.  I’ve been to jail a couple of times, I’ve beat up Yakuza and been beaten up by them, been a professional fighter, been professional protection for gangsters, porn stars, and past war criminals, and have been doing this for so much time, I’m passing through that long, long self-destructive phase and coming out the other end, I think finally, as an adult.  It only took 38 years.

So, as like a kind of parting shot, a farewell salute to a decade of absolute lawlessness and debauchery at the expense of a lot of broken hearts, busted teeth and squandered Japanese yen (a small fortune if people really knew; little of it I earned), I decided to step up, make the investment and let Japan make its mark on me.

I decided on Honey Tattoo for a couple of reasons. First, it’s a four-minute walk from my house in North Ikebukuro.  Second, all the designs are Japanese and original. The boss, Horimitsu-san, designs and draws it all himself.  The down payment for a design is 10,000 yen.  This weeds out a lot of idiots right from the get go I suspect.  I went in and talked to him, explained what I want and he had it ready in two weeks.

This is the face of Raijin, the Japanese, I mean by this Shinto, god of lightning and thunder. My first visit to the shop, Horimitsu explained the process would be partly done with a tattoo gun, so Yobori style and the color, for example the leaves falling and the lightning bolts, would be done the old way or Tebori style. So, we began with the gun, it makes the lines darker and the work is done faster. The first session was three hours and you can see, we began to cover up some of my other tattoos.

The three-hour restriction was set by Horimitsu.  He’s also damned busy so I can only get in once a month or so. 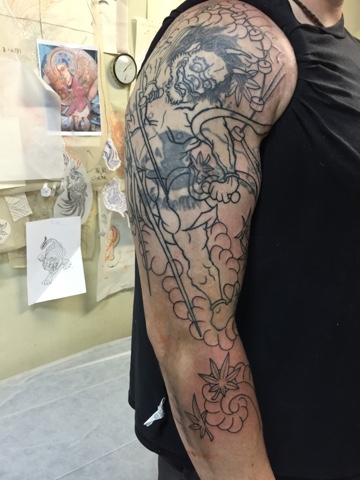 I began to see at this point, the man knows well what he’s doing.  Raijin dashing lightening all over, pounding on the drums, the clouds swirling and the autumn leaves falling from the trees.

After the outline was completed we finally started shading.

This is where it’s at currently, with some additional shading up the arm.

If you have considered getting some work done, real Wabori style work in Japan, Horimitsu is the guy to see in Tokyo. He’s open to foreigners, but also takes no shit.  Talking to him about old school Ikebukuro and what used to go down on these mean streets is fun as well; wild stories abound.  One thing for sure, like other Japanese tattoos, or any high quality tattoo work, it takes time and costs money.  These aren’t 400 dollar Hawaiian tribal sleeves you can get in an afternoon.

These are a process and so far, it’s worth it.

I’ll update when there’s more to discuss and possibly get an interview with Horimitsu as well.