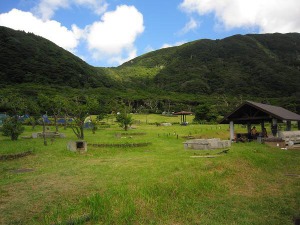 It has been a busy summer.

In July, I was lucky enough to get out of the city for a bit and with friends in tow, made it to Niijima Island. Friday night, the 16th we all met at Takeshiba pier, sorted out the tickets and then lined up along with the other hundreds of people taking the ferry the eight plus hours to the islands south of Tokyo. Leaving at 11PM and arriving in the morning, the actual ferry ride itself is essentially an all night party. The decks are covered with blankets, picnic tarp and bodies, everyone trying to be as comfortable as possible while floating across the black night waters in conditions that made me feel akin to some poor bastard from Fukien, China riding the thirty-thousand dollar “pirate me to America” ticket offered up by dubious and often violent human traffickers.

A business that is thriving, but I digress. Oh, how I digress.

Before I continue, I will address a few key points one might want to consider if one is traveling to Niijima.

In addition to the stated points above you might want to remember to bring Beer, and lots of it.

We spent several hours of the initial ferry ride just getting acquainted.  Some of the old hands were there: TheRock,  Dr.Hats,  Ta-chan#1, LeTigre and yours truly.  We also had two additional crew members in TheRocks girli-o Maki-chaki and Dr.Hats female companion Waddler.

Booze flowed freely and everyone enjoyed the music floating around the boat from various sources while we all snacked on some dishes Waddler had prepared and didn’t mind sharing. 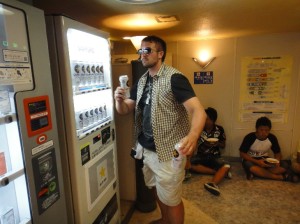 I woke up at about 0500 on the steel deck, now warm from my body heat and the early morning sun pouring all over me. To my left was Tachan#1, a towel wrapped around her face to ward off the invading sunlight and her body twisted into a sleeping posture I have only ever seen skinny Japanese girls pull off, yet I am sure some Yoga guru in India would feel just fine with. To my right was some un-identified German girls, now chatting happily, in German, about the price of socks in Harajuku. I have had stranger mornings, once you wake up with a 12 year old Mexican kid getting ready to piss on your face, you have sort of seen it all, so I took this comfortably in stride. 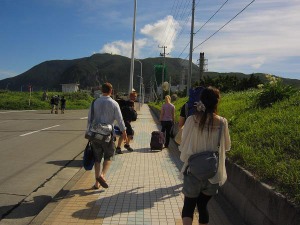 By the time the ship docked and everyone collected themselves and disembarked, I found myself standing on a slick cement tarmac in the blazing early morning sun, sweat dripping down my face, my back, my forearms. Once the whole crew was collected, I hoisted up my purple rucksack and we all headed off. Dr.Hats had been to the island before and informed us that it was necessary to rent bicycles in order to access the camp site and get around on the island. No problem. But quickly, the trek to the bicycle shop came to resemble something akin to the Batan death march. Temperatures were soaring and not everyone had outfitted themselves properly for what was actually the climate you’d encounter on a tropical island. LeTigre; she was suffering. A T-shirt with jeans, pulling along a rolling suitcase, her face a portrait of misery, moved along more by sheer will power rather than anything else. The realization that if she were to stop, she would likely be left for dead, helped to push her further.

In addition to it all, other people from the boat cruised by us in taxis or on foot without bags, one such girl deciding to make the brilliant observation “Wow, you guys are carrying your bags.”

Due to our retarded speed, we reached the bike shop late and true to form, no bikes, they had all been rented out. We got directed to a secondary vendor. By “Secondary” I mean “Shitty”. 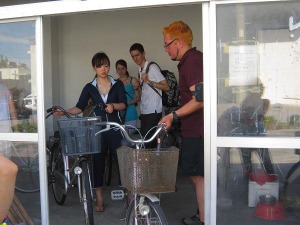 The first bike shop offered sleek looking mountain bikes. Our shop kept it old school, Nagasaki-Hiroshima era old school. Solid steel Granny crawlers complete with rust, flat tires and old dilapidated baskets on the front. Chances are, some of our bikes actually made it through the bomb drops.
In case you haven’t heard though, beggars just can’t really be choosers so after convincing Evil Mama-san the Bike pimp to drive our baggage to the Camp site, we set off. It took about 10 minutes for the chain on my bike to explode. This would be the first of 3 bikes I would destroy during our three days on the Island. 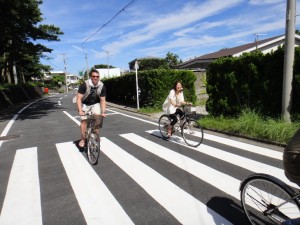 The camp site is free and managed/maintained by the island. It is about a solid stones throw from the beach and is equipped with all the goodies:

We wasted no time, set up camp, changed our clothes and set off to the beach. It did not disappoint. 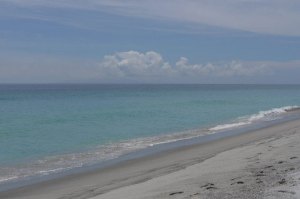 Niijima’s beach is nice. White sand, blue-green emerald water that sparkles and a distinct LACK of people all over the place. I have been to Zushi beach and Enoshima Beach and although I had fun with friends etc, Niijima easily lays the smack down and puts those bitches in their proper place. We spent the morning splashing around and playing Frisbee and generally getting heavily sunburnt. LeTigre turned bright red, TheRock became a solid shade of disconcerting purple.
Waddler, Maki-chaki and Tachan#1 set off and brought back loads of snacks and booze for lunch and shortly there after, all were feeling no sunburn pain, or any pain of any kind. At approximately three Pm myself, Dr.Hats, TheRock and LeTigre all set of, buzzed, for the elusive super market, the only one on the Island.

What follows are nothing but the sad facts.

1500- The four of us set out in the general direction of the supermarket on our Granny crawlers. Its hot. Sweat flows.

1525- We stop at an intersection and Dr.Hats goes into a curry place and asks directions. The sweet old lady tells us to go right at the intersection. We set out.

1550- That old bitch lied to us. We had to cycle up hill on bikes used for torturing people in civilized parts of the world and although we don’t find a supermarket, we manage to lose TheRock.

1610- We retraced our steps and decide the old liar meant to tell us to go LEFT, not right and we do. Then we decide to stop and see if TheRock will come back our way.

1618- TheRock comes bombing down a hill. The bike basket is full with an entire case of beer and a bottle of shochu. The weight and speed of travel is causing the bike to shudder and weave violently but TheRock is holding a beer in one hand and trying to pilot with the other. Somehow he makes it. Beers are distributed. We set off up a massive big evil hot hill in search of our Holy Grail.

1625- We flag down a car and Dr.Hats gets new directions. The supermarket is apparently just at the top of the hill on the right. Energized, we set out.

1640- Top of the hill my ass. This hill never ends. It just keeps going, taunting us. We pass a bizarre park on the side of the road with huge cement dinosaurs in it. TheRock informs everyone that he will wait there for us and he gets off his bike, grabs the case of beer in his arm like a child holds a teddy bear and wanders into the creepy-random dinosaur park, his sun scorched purple skin clashing with the Grey bland dinosaurs.

1655- We get to the top of the hill. My bike tire implodes. I curse the heavens, and throw the damn bike into the jungle. LeTigre goes ahead on her bike to scout out what looks to be a very very long, straight road leading to no place.

1710- After discovering that once again the locals on this devil island have lied to us we go back to where we think the supermarket might be. LeTigre rides tandem with Dr.Hats and I follow on her bike. We pick up TheRock who informs me that “Those dinosaurs were not nice, they were covered in spiders.” He can no longer focus his eyes and has drank 5 of the beers from the case. He hands me one as we then fly down another hill. I manage to open it and not crash violently.

1730- We arrive at the fucking “supermarket.” It’s not particularly super. In fact it’s barely a market. We shop. We buy enormous amounts of food and tons of booze. We pack it up. TheRock has somehow befriended two Japanese skateboarders outside that say they are in the Japanese Navy. We all suck down beers for a few minutes. This one guy tries to do a kickflip but eats shit hard. Then we take off.

1740- The bike LeTigre and Dr.Hats is on dies. They are now walking. TheRock and I literally throw our heads back and cackle at the top of our lungs as we cruise by. More beers are consumed.

1845- The BBQ is rocking and all seem as one with the World.

Some highlights from that night:

The following day was much more relaxed. Everyone was nursing hangovers and just enjoying the slow pace of being someplace with no computers, no trains, no crowds of people and no expectations. Just the sun beating down, the breeze and the Ocean and its insanely wonderful and abusive surf.  It was genuinely a free day. 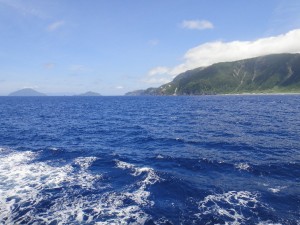 All in all, Niijima gets 4 stars.

It can be a bit difficult to navigate if you have never been before but it’s worth it. The beaches, the lack of people, the warmth, all of it came together to make the trip very worth the cost of the ticket.  If you have time, don’t waste it, see whats out there. 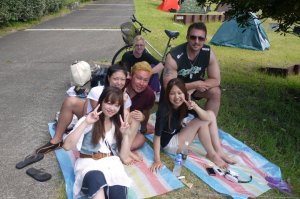 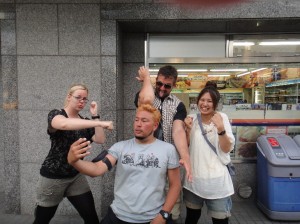 10 thoughts on “Insights into the Enchanting: Niijima Island”