The Eiger is an infamous mountain in the Alps. Its northface was one of the last climbed in the 20th century, not being conquered until 1938. Since 1935, at least sixty-four climbers have died attempting the it, earning it the German nickname, Mordwand, or “death wall”. What makes the mountain unique is that even though it one of the more dangerous climbs in Europe it has a train running right up the middle of the mountain and at its base is the five star hotel complex, the Kleine Scheidegg hotels.

I just watched a movie describing all this, the great TV special The Beckoning Silence

based on the book of the same name. The movie is produced by the same people who did the great Touching the Void about Joe Simpson’s tale of survival in the mountains of Peru. In Beckoning Silence Simpson narrates the story of Toni Kurz and his team’s attempt up the Northern slope after the mountain had claimed the lives of two of their friends Karl Mehringer and Max Sedlmeyer. Simpson can relate to Kurz’s story because he went through something similar and the drama of event and Simpson’s narration create a riveting experience. 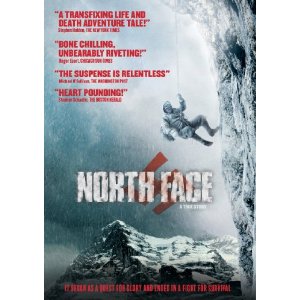 If documentaries aren’t your thing, they recently did a dramatization of the Kurz story called North Face (2008). Basically the same story with an added Nazi angle that I think the producers just threw in to sell more movies. The story alone is a great movie they didn’t need to add in the Third Reich but that’s just my opinion. And what was up with the girlfriend angle? I don’t know why they threw that in there. It’s a German movie so you’ll have to watch with subtitles but if you can’t do subtitles you can always watch The Eiger Sanction

During the 90s Hollywood totally ruined the adventure mountain climbing genre by insisting that every climb somehow involve explosions and over the top villains. 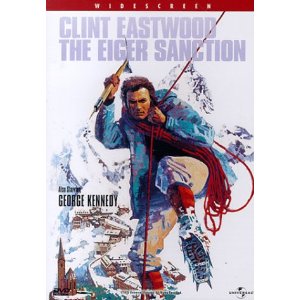 Before sly and his ilk killed any chance of a respectable climbing movie being made there were was number of titles involving the drama and tension of mountain climbing. One of the best, and the one that takes place on The Eiger, is Clint Eastwood’s The Eiger Sanction He made this movie in 1975! 1975!! Jesus and this man is still kicking ass now! In Clint’s Eiger Sanction he plays a spy that has to out another spy while attempting to duplicate Kurz’s climb up the Deathface of the Eiger. The plot summary makes it sound cheesy but the actual movie shows how an action mountaineering movie should be done.

One thought on “The Eiger”