Václav Havel; A MAN amongst politicians.

Václav Havel died on December 18th.  He was an intellectual, an artist, dissident and despite his own misgivings a popular politician.  He was the last president of Czechoslovakia from 1989-1993 and the first president of the Czech Republic from 1993 to 2003.

His views regarding politics, the morality of man regardless of his station and situation and the ability of an individual to make change are legendary.

The following is a slightly trimmed down version of statements he made in 1998 as shared on project syndicate.

The following deserves a place in the mind of every American considering the upcoming presidential election, arguably the most important in the last 20 years, and the general state of the Republic as we find it today.

Prague, Czech Republic – Does an intellectual – by virtue of his efforts to get beneath the surface of things, to grasp relations, causes and effects, to recognise individual items as part of larger entities, and thus to derive a deeper awareness of and responsibility for the world – belong in politics?

Put that way, an impression is created that I consider it every intellectual’s duty to engage in politics. But that is nonsense. Politics also involves a number of special requirements that are relevant only to it. Some people meet these requirements; others don’t, regardless of whether they are intellectuals.

It is my profound conviction that the world requires – today more than ever – enlightened, thoughtful politicians who are bold and broad-minded enough to consider things that lie beyond the scope of their immediate influence in both space and time. We need politicians willing and able to rise above their own power interests, or the particular interests of their parties or states, and act in accordance with the fundamental interests of humanity today – that is, to behave the way everyone should behave, even though most may fail to do so.

Never before has politics been so dependent on the moment, on the fleeting moods of the public or the media. Never before have politicians been so impelled to pursue the short-lived and short-sighted. It often seems to me that the life of many politicians proceeds from the evening news on television one night, to the public-opinion poll the next morning, to their image on television the following evening. I am not sure whether the current era of mass media encourages the emergence and growth of politicians of the stature of, say, a Winston Churchill; I rather doubt it, though there can always be exceptions.

To sum up: The less our time favours politicians who engage in long-term thinking, the more such politicians are needed, and thus the more intellectuals – at least those meeting my definition – should be welcomed in politics. Such support could come from, among others, those who – for whatever reason – never enter politics themselves, but who agree with such politicians or at least share the ethos underlying their actions.

I hear objections: Politicians must be elected; people vote for those who think the way they do. If someone wants to make progress in politics, he must pay attention to the general condition of the human mind; he must respect the so-called “ordinary” voter’s point of view. A politician must, like it or not, be a mirror. He dare not be a herald of unpopular truths, acknowledgement of which, though perhaps in humanity’s interest, is not regarded by most of the electorate as being in its immediate interest, or may even be regarded as antagonistic to those interests.

I am convinced that the purpose of politics does not consist in fulfilling short-term wishes. A politician should also seek to win people over to his own ideas, even when unpopular. Politics must entail convincing voters that the politician recognises or comprehends some things better than they do, and that it is for this reason that they should vote for him. People can thus delegate to a politician certain issues that – for a variety of reasons – they do not sense themselves, or do not want to worry about, but which someone has to address on their behalf.

Of course, all seducers of the masses, potential tyrants or fanatics, have used this argument to make their case; the communists did the same when they declared themselves the most enlightened segment of the population, and, by virtue of this alleged enlightenment, arrogated to themselves the right to rule arbitrarily.

The true art of politics is the art of winning people’s support for a good cause, even when the pursuit of that cause may interfere with their particular momentary interests. This should happen without impeding any of the many ways in which we can check that the objective is a good cause, thereby ensuring that trusting citizens are not led to serve a lie and suffer disaster as a consequence, in an illusory search for future prosperity.

It must be said that there are intellectuals who possess a very special ability for committing this evil. They elevate their intellect above everyone else’s, and themselves above all human beings. They tell their fellow citizens that if they do not understand the brilliance of the intellectual project offered to them, it is because they are of dull mind, and have not yet risen to the heights inhabited by the project’s proponents. After all that we have gone through in the twentieth century, it is not very difficult to recognise how dangerous this intellectual – or, rather, quasi-intellectual – attitude can be. Let us remember how many intellectuals helped to create the various modern dictatorships!

A good politician should be able to explain without seeking to seduce; he should humbly look for the truth of this world without claiming to be its professional owner; and he should alert people to the good qualities in themselves, including a sense of the values and interests that transcend the personal, without taking on an air of superiority and imposing anything on his fellow humans. He should not yield to the dictate of public moods or of the mass media, while never hindering constant scrutiny of his actions.

In the realm of such politics, intellectuals should make their presence felt in one of two possible ways. They could – without finding it shameful or demeaning – accept a political office and use that position to do what they deem right, not just to hold on to power. Or they could be the ones who hold up a mirror to those in authority, making sure that the latter serve a good cause, and that they do not begin to use fine words as a cloak for evil deeds, as happened to so many intellectuals in politics in past centuries. 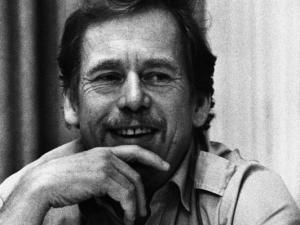 Hope is a state of mind, not of the world. Hope, in this deep and powerful sense, is not the same as joy that things are going well, or willingness to invest in enterprises that are obviously heading for success, but rather an ability to work for something because it is good.

16 thoughts on “Václav Havel; A MAN amongst Politicians.”