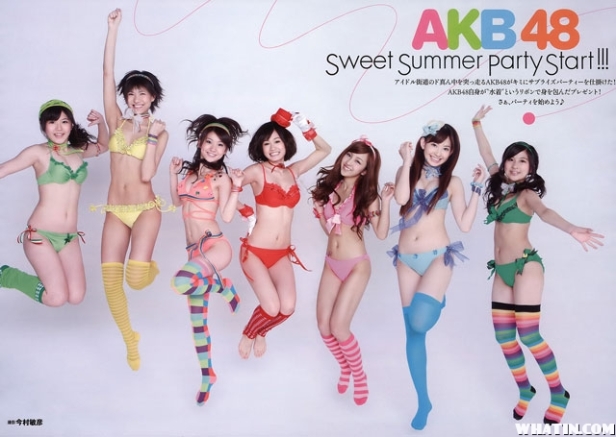 AKB48 is a Japanese pop band like the UKs Spice Girls but with a constant changing cast like the PussyCat Dolls (But not as slutty as them).  Like the name suggests they are a group of 48 young girls divided into three teams: Team A, Team K and Team B (Although recently they’ve added another team, Team 4, with 12 members so there are a total of 60 members as of July 24, 2011). They have their own stage in Akihabara (On the 8th floor of Don Quijote if you want to go) where they perform once every weekday, and more than once on both Saturday and Sunday.

They’re an institution in the Japanese pop scene and a marketing guru’s wet dream of a music group. They have a large following, plenty of merchandise and a large enough group that any rowdy singer who shows any “uppity” tendencies like refusing to wear revealing clothes, or wanting more money can be shunted aside without affecting the overall cast appeal.

On TV I just saw their Junken (English:Rock, Paper, Scissors) championship to see who will be the lead singer for their next single. The Junken faceoff was held at the Budo-Kan stadium (Same place the Beatles played Japan). Thousands of fans paid, I’m sure a big sum of money, to go watch what essentially was a marketing ploy for AKB48’s next single.  The TV show I was watching is a legitimate news program and it spent almost an hour following the competition and analyzing each players’ Junken skills (Uchida Mayumi won BTW). The coverage was just ridiculous but at the same time you just have to admire the minds behind the whole event.   Live Junken championships what a brilliant marketing scheme.

If you like this review, you should check out: