After talking about world leaders that had serious drug addictions Although there is a big problem when chimps go bad I thought what better way to continue this line of thought than Chimps and Crack! Well not crack but beer and cigarettes!

Charlie the Chimp at his zoo in Bloemfontein, South Africa:

For years Zhora the chimp lived the life of a carny: no real home, a different town every night, and a life of filled vice and temptation. But during his time on the road Zhora maintained his body and stayed away from the booze and cigarettes. It wasn’t until he retired and was transfered to a zoo in the southern Russian city of Rostov that he picked up his bad habits.

Perhaps it was to block the wanderlust that every carny has in their soul or maybe it was to dull the monotony of settling down and starting a family. Whatever the reason Zhora spent his days at the zoo making babies with his new large harem, getting wasted off half filled beers zoo visitors would throw in his enclosure and begging for cigs to satisfy his new nicotine addiction, his “monkey on his back”. It wasn’t until 2010 that his Russian keepers decided to send him to the city of Kazan, about 800 km (500 miles) east of Moscow, for rehabilitation treatment. Good luck little chimp … good luck.

China has a very conservative culture and up until quite recently most marriages were prearranged by the bride and grooms’ guardians. Such was the case with Feili the chimp who was paired with a male 28 years her senior, who much to her disdain was unable “to meet her sexual demands”.   Irritable, always on the edge with no one to satisfy her animal desires Feili turned to the nicotine. Zoo visitors at the Zhengzhou Animal Park in the Henan province throw cigarettes to her and in a remarkable show of how advanced chimps are Feili uses various tools, like sticks and ropes, in her enclosure to get the already lit cigarettes that are just outside the enclosure inner fence.

In the heedy days of the late 80s Ai Ai a chimp from a safari park in the Shaanxi province, north-west China lost her mate. Depressed at her loss the Chinese zoo staff thought it would be a great idea if she had something to get her out of her funk. What better way to get out of the pit of depression but smoking! So it went for the next 16 years before staff worried about her health cut her off cold turkey and substituting the sweet taste of nicotine with mouth watering food and more time out of her cage. Her keeper remarked “In the first few days, she squealed for cigarettes every now and then, but as her life became more colourful, she gradually forgot about them altogether.”


Shirley an adult female orangutan at the Johor Zoo in Malaysia took up smoking after endless days stuck in her antiquated pit-like cage. Visitors to the zoo throw her cigarettes that are already lit. But in a remarkable display of orangutan (the other smart monkey) intelligence, Shirley uses the still smoking buts to light other unlit cigarettes in her cage! 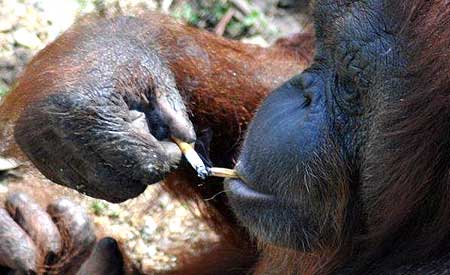