You’re about to read something by a man who can run faster, swim further, shoot straighter, fight dirtier, drink stronger, cuss filthier, suffer quieter, not give-a-fuck harder, yet inspire deeper and look the abyss dead-in-the-face longer, than most likely anyone you have ever met.

I’ve known J.P. for what in my life, would be considered a long time.  Maybe it’s my life style, maybe it’s theirs, probably both, but the people who I call friends generally aren’t in the rotation for as long as I would like.  People move away or they change. Sometimes they die and other times they just disappear;  More often than not the latter of the two.  So, my list of friends is short.  I know many people, but actual friends are few.

J.P. came to me about writing a post and without any hesitation I said “Hell yes.”  Over the years, even amongst my friends, he stands out as someone who has always had an insightful perspective; never simply recycling the same trite crap that most people toss around.  He’s a man who has seen the world, has won some battles and lost others, and has been a leader of men.  There’s a humanity to him that you can’t know unless you’ve spent time together and which simply does not exist in most people these days.

He’s not a plastic human or a disposable, sanitary option.  He’s not a weak, half-assed photo-copy or a 10 dollar celebrity t-shirt.   He’s real. I’m proud that he calls me his friend.

This article is an incredibly personal one and to me it says things that for many, including myself, are terribly difficult to put into words.  A lot of people don’t “get” me.  They just don’t, and they never will because they don’t know what I know and haven’t taken the path I have.  Frankly speaking, you might have known me for years, but in reality you don’t know me at all.  JP and I have shared the path together at times, and although we’re in very different places now, he knows.  He always seems to know.

Reading this might confuse you and it will surely challenge some of your sensibilities, but these are things you don’t often get in everyday life.  This thing, which has become such a rarity, even amongst the people closest to you is what you are about to be exposed to… 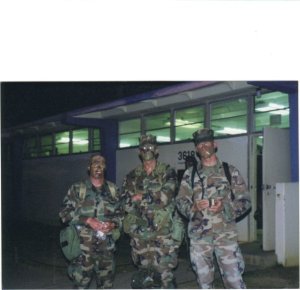 My Mission. My War. My Life.

There comes a time for all things to end.

No matter how good or bad something may be, it does not last forever.  This is the case in my situation.  I was diagnosed over a year ago with chronic PTSD.  I will soon be medically retired from the one thing that I have clutched to my heart for almost half of my life, the United States Marine Corps.

The news comes to me as both a source of panic and one of relief.  I am relieved because I will be getting the treatment that I so desperately need to function normally in the outside world, yet panicked because I do not know how I will get along in a world among a populace where 99% of the people I meet simply do not “get it”.

I know that there are many who do not support, and even frown upon war, but it has made me the person that I am today.  For better or for worse, I will always carry the ghosts of many with me for the rest of my life.  The ghosts of my friends and my enemies.

I joined a profession of men who train to kill for a living.  Some of those men never get the chance, but I am not among them.  It may seem like tears in the ocean, but I have spent 88 days of my 37 years of life engaged in mortal combat with an enemy.  Killing people comes with a price and a satisfaction that only one other action can give you, and that’s saving one.  I stopped truly counting how many men I have killed somewhere past 40, and instead began weighing how many lives I have saved by doing so.  When you can look into a dying man’s eyes and respond to him when he says “Tell my wife I love her” with “Tell her yourself”, it empowers you to a point that nothing else can top.

Taking a man’s life is infinitely easier than saving one.

So, as I will soon transition to a life where I do not kill or train people to kill for a living, I am uncertain of what life will hold for me.  I can without a doubt say that war and training for the acts of war has made me a better person overall.
I can also say with absolute certainty that I have worked with and trained some of the most amazing men on the planet.

One of those men is Mr. Gaijinass himself.  I will leave the stories about Eric and I for him to tell, but I will say that he is among a select few that has what it takes to be a professional killer.

I have seen in my exploits some of the toughest men cry like children when faced with certain death.  I have seen people who were considered weak by many standards rise to the occasion when the chips were down, and turn the tide of battle in the name of saving that man on his left or his right.  I have personally had to make a decision to let someone die so that others may live (one of the hardest decisions I have ever made).

To look at a man who is desperately trying to save his friend’s life
(a nearly decapitated Marine) and tell him that there is nothing he can do to save him, and make him go fight a pressing enemy is something that I will both always and never regret doing.  The profession that Eric and I chose was one that is both unsavory and thankless.  It is also necessary to maintain order and balance in the world.

Warriors live and die knowing that every move in combat could be their last.  They do terrible things in the name of a cause that others are not willing to do. I fear that my tenacity as a human being is a bit over the top for the general populace. I look around at the world and I wonder if what I have done in life (as a professional killer) has made a difference.  I wonder if the ghosts I carry with me are all for naught.

Generally speaking, I say no.

I would not give up what I have done for anything. No amount of money or fame could ever replace the feelings I had when all I could do was fight to survive.  Those moments are what truly gave me life.

The burdens I carry from my PTSD are many.  I have sleep disorders caused mostly by nightmares, and I often see things that aren’t there.  It has caused me to take things so seriously, that I hold everyone to a higher standard in life.

I expect everyone to try to do everything better than whatever it was they did last.

The issues that I have and the approach that I take with them have a tendency to make people feel small.  Call it paranoia if you will, but if you aren’t doing things to your absolute best, then someone else has to pay the price for it.  I see this in every aspect of life now.  You could be in any profession, and if you aren’t doing what you can do to top your last effort, then you are a failure and should promptly remove yourself from the gene pool.  The world as I see it has become soft because people have taken less and less pride in what they do as humans. They look for shortcuts and handouts.  They choose to take the path of least resistance, even though in many cases the rewards are much less.

I understand that peace is ultimately better than war, but I also know that the only way to stop war is with more war.  This is the endless cycle.  I know that life “out there” is not combat, but it does not change how I feel about how people should operate.

There is a natural order to the world, and it begins and ends with how much effort you put into something.  I am a true believer that a person can not truly be a person until they have faced and overcome dire adversity.  I believe that you can only truly appreciate life as we know it when you have personally seen how delicate it is and how quickly it can end.

I secretly long for a day when the apocalypse happens, and the world becomes a place where only those that can earn it by any means necessary can have it.  I know it seems childish, but this is how I have lived the last 7 years of my life.  What’s mine is mine, and the only way you are going to get it is to pry it from the hands of my stiff corpse.

I know that this topic is not something that you would normally see here, but I have known Eric as a friend, brother, student, and colleague for almost 15 years.  I asked him if I could write something about what is going on with me on his blog, because I feel that it is a more limited forum of intellectual people.

I know that I may be judged for my opinions, and I am OK with that.  I also know that most of the people that browse this blog have faced adversities of many types in their lives.  I know that in the end, I will succeed in life, but I am hoping to maybe gain some advice from people on how to not want to hold people to the standards that I feel the world so desperately needs.  I know that the terms “good, bad, right, and wrong” are all relative to the person looking at them.

For those that are interested, I plan on going back to school to become a computer forensics specialist. I will also most likely volunteer some of my spare time to help people with PTSD issues like myself. I am not here for sympathy, just advice on what will probably be the most difficult transition of my life.

Thanks to all of you in advance for reading this, and again thanks if you have some advice for me, no matter how harsh it may be.