Sceptre productions is the brain child of Rionne McAvoy. Hailing from Australia, he intends to bring a new sensibility to Japanese film and is prepared to do it from the ground up.  His latest project is almost completed and we sat down to knock out a quick interview hitting him with whatever happened to come up.

Answers weren’t the focus, more the voice itself.  Identity is action, and again as with our other interviews, the subjects “Who” is defined by his “Doing–this-Now.”  For some people, “Cowboy the fuck Up” is a daily life style, not just a bumper sticker.  Read on and learn how day dreams can materialize into realities.

1.Why Movies? Why Japan?

Unlike quite a lot of directors, I didn`t go to film school. I also am not a self-confessed film geek like Scorsese or Tarintino. Both these guys are walking encyclopedia`s on the history of film. For me, everything stems from my love of Martial Arts.

I started Karate when I was 7, and except for the period between 16-19, I have been training all my life. I came to Japan when I was 19 to study Karate, but eventually ended up switching to Aikido when I was 21, and also started Kick Boxing around the end of 2008. Growing up, I was always watching martial arts and action flicks. As a boy, it was always my dream to one day become a big action star like Jean Claude Van Damme and Steven Seagal. These guys, along with the likes of Bruce Willis, Arnie, Stallone and later on Jet Li, really shaped my passion for the action genre.

Although it was always a dream to be an actor, I really didn’t decide to do anything about it until I was well and truly addicted to the TV show 24, which is, and will always be, along with the film Heat, my biggest influence. So in early 2008, with my dream of being a big action star still fully intact, I approached an American director who I was also teaching Aikido to, with a script I had written. Looking back now, the script was horrible, but nonetheless, the director agreed to help me out and suggested we make a trailer to show potential investors.

With this in mind, I went out and started putting a team together. This was the first time that I began to notice that my skills as a producer (and later on director), someone able to put together a team to work on a film project, were far better than my skills as an actor!

After assembling a crew of 5 plus roughly 5 or 6 actors, we had our first shoot, an action scene where I was to chase a bad guy down a street and do an Aikido based fight scene, before finally jumping off an apartment building balcony. I was nervous and excited at the same time, but I really wanted to know what was going on behind the camera. As the shoot progressed, the director quite rightly told me “that`s my job, you concentrate on doing a good performance in front of the camera!”.

The director however, had some personal issues he had to deal with, and quit the project after the first shoot. I was suddenly left the task of director, producer and actor on my very first film shoot. Needless to say, I was completely out of my depth, and made every rookie mistake possible. Nonetheless, this was my film school 101. I learnt how to use a camera properly, how to treat actors properly, how to generate a vision and how to put that vision into pictures, and most importantly, how to see a project all the way through to the end.

In the end, thanks to some great editing by another friend of mine, and the help of my team, who guided me all the way, my first project ended up looking very good. As a first project, I was extremely happy with it.

The biggest problem with it however, was my acting. I sucked. Badly. It was only after showing it to a potential investor, who commented almost straight away just how bad I was, that I decided that acting wasn’t for me. I am usually not the kind of person to give up so easy, but after experiencing the entire behind the camera process, I knew that directing was exactly what I wanted to do. I went on to produce and direct a 42 minute short film called Set in Stone which was my first solo project.

2. Can you tell us a little more about your current project?

My latest film, Reverence, is a feature-length film. We are in the final stages of filming and editing right now, and expect the film to be about 110 minutes long. We started filming on December 6th, 2010, and are still going! The actors all work for free, as do the staff, and because we all have full-time jobs, filming can only be done on weekends. 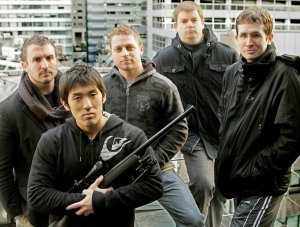 The film is about two brothers, Kunihiko and Keijiro Kimura, who are hired to kill four specific Japanese law makers who hold the key to uncovering corruption within the Japanese government. When things don’t go exactly to plan and with the Japanese National Police Agency hot on their heels, the brothers are double crossed by their bosses and must find a way to get out of Japan before time runs out.

3. How difficult is it shooting what is essentially a cop thriller in a city like Tokyo?

Extremely challenging at times, yet extremely easy at other times. Japan is a very peaceful society, with very little visible crime, so shooting anything other than a Yakuza film is very tough because the crime stories that are portrayed in film, rarely happen in real life here. My film has a lot of sniper sequences, which is something that is just not realistic in Japan. The challenge, and I guess this goes for any director, is to suspend the audience’s belief and let them enter the fictional world you have created in your film.

The fact that I can pull out a replica sniper rifle on a roof for several hours at a time, on multiple days with no permission from the authorities at all, and not get in any trouble, really is a credit to Japan. Pulling out replica handguns on the street and filming is also fine, people here don`t blink an eyelid, unless its to say “oh look, they are shooting a movie!”.

The biggest challenge to shooting any kind of movie here though is undoubtedly trying to get permission to shoot. Some directors say it is easy, but on my first project, I went through all the proper channels and experienced nothing but trouble. I now shoot everything guerilla style, and make no qualms about it. Hospital scenes, police station scenes, sniper roof scenes and every other scene in my film are all shot guerilla style. I`ve been called “The Tokyo Guerilla King” by other local filmmakers here! I know I cannot go on shooting like this forever, but for the moment, the way I am doing things certainly produces the best results.

4. Up to this point, has anything happened during this shoot that you are really proud of or impressed with?

From a personal point of view, I am proud of my growth as a director. Each shoot we do is better than the last and it really is a thrill to see your vision put onto the screen. I am also proud of having been able to direct, produce, edit, location scout, audition actors, write the script, and coordinate each shooting day (actors, meeting times, shoot length, locations) almost entirely alone. I have had a little help along the way and am extremely grateful for that as well. I am also proud of the fact that I was able to put over US$5 million worth of classic and modern cars into my film, for free! You`ll see a classic 1967 Ferrari, and brand new Ferrari 580, a 1955 Mercedes Benz, a 1969 Pontiac, a brand new Ford Mustang and Bentley, as well as others in the film.

From a team point of view, I am extremely proud of our growth as a production team. The small crew that we have are fantastic, and the actors first class. We are all still learning our trade, but we come together with the same common goal of making a film that is enjoyable for others to watch. It has been a pleasure to meet new people, build meaningful relationships, and make friendships that will surely last a long time.

5. What is the most valuable lesson you have learned while working in the “underground” film industry in Japan?

The most important lessons I have learnt are two very important lessons. The first one is how to network, hustle, and talk. With little or no budget, and no studio backing, being able to make your film look like it has a much bigger budget while in reality it does not, is extremely challenging. It is however, not impossible. With the right mixture of networking, hustling, and the right words, in Japan, you can get almost anything you want.

The second lesson is that, in the end, no one will have the same amount of passion for your project as you do. To everyone else, it is understandably, just another project. Thus, I had to learn to be ready when people have to cancel on you. Things happen in daily life, sudden things come up, and sometimes people cannot be there on the day when they had previously promised. Because my actors all work for free, when they get a paid gig, of course they have to take it, and it is up to me to rejuggle everything to fit these problems in. As well as this, actors also have busy schedules, sometimes acting in 3 or 4 projects at one time, so trying to match everyone`s schedules is at times very frustrating.

6. Advice for someone at home thinking about taking a go at making their own film?

Go out and do it! Movie magic happens on all levels, so get a camera, get a script, and go out and shoot! You`ll have a blast, make a bunch of new friends, and who knows where it might take you!

7. What’s next for Rionne McAvoy and Scepter films?

First thing is to get Reverence in the can. Post production is incredibly taxing. Everything from re-recording voices, adding in previously taken location sounds, color correcting, re-editing the edit, takes a long time and I am certainly looking forward to the big wrap party we plan to hold in April.

After that, I`ll be submitting the film to as many film festivals (both in Japan and abroad) as I can. No rest for the wicked however, because my next project is already lined up, a “gaijin” (foreigner in Japan) comedy.

8. Last chance, anything you want to tell the world? Make it not suck…

People have continued to ask me, “Rionne, what can I do to help you and your crew out with this project?”  There are many ways people can help us out! I currently have an online funding campaign, where I am trying to raise money to finish off the film. People can donate as little as $10 or as much as $5000 and we are extremely grateful for any donation given!. We also talk a little bit more about why we believe we can change the face of Japanese cinema on that campaign page. The link is right here, anything any of you can do is a HUGE help.

The last thing I’d like to say is thanks to the readers here at Gaijinass for taking the time to check my team and I out, and please keep your eyes open for REVERENCE in April!

You love it and we can tell, try these out: